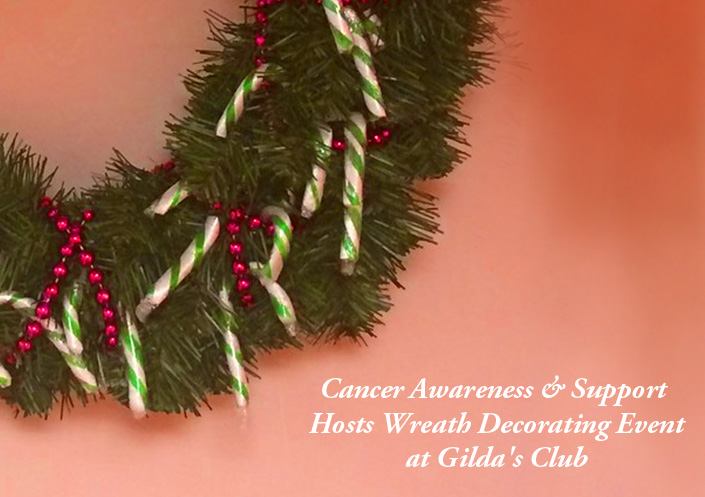 On December 3, the Cancer Awareness and Support (CAS) committee held a wreath-decorating workshop at Gilda’s Club. Gilda’s Club, named after the late comedienne Gilda Radner, is an international organization that provides support and networking opportunities for individuals impacted by cancer, including patients, their families, and caretakers. At the December workshop, the CAS committee supplied the wreaths and ornamentation—including festive ribbon, glittering beads, and seasonal florals—while the members of Gilda’s Club supplied the more crucial ingredient: their creativity!

With Christmas carols playing in the background, Gilda’s Club members beautified ten wreaths. Several of the wreaths were used to decorate the Clubhouse for the Club’s holiday party. The workshop was very well received by Gilda’s Club. Members were grateful for a creative outlet as well as a head start on their holiday decorating. Gilda’s Club is one of several organizations CAS works with to fulfill the committee’s mission of providing support to cancer patients and their loved ones. CAS has hosted events at Gilda’s Club ranging from a calligraphy workshop to Pilates classes, and looks forward to providing another full calendar in the spring.

“The wreath decorating workshop was such a success that as a committee we plan on making it an annual activity for Gilda’s Club members,” said CAS committee co-chair Contessa Officer. CAS provides education about the importance of cancer awareness and prevention, as well as direct support to cancer-stricken individuals and their families. Other CAS community partners include the American Italian Cancer Foundation, the American Cancer Society’s Hope Lodge, and Ronald McDonald House, among many others.