Amid the COVID-19 situation, the New York Junior League is still identifying ways to serve our community. As New York City schools adjust to the new normal, educators settle into remote teaching, and students grapple with a new, ad hoc way of learning, more than 100,000 students who are homeless might not have the same opportunities to learn.

This week, the NYC Department of Education (DOE) opened up Regional Enrichment Centers (RECs) to provide safe child care to students whose parents are first responders, health care workers, and key transit employees. Yesterday, the mayor added the children of grocery store and pharmacy workers to the list of children eligible to enroll in a REC.

However, the 114,000 children experiencing the daily trauma of housing instability are not eligible to enroll. The NYJL signed on to a letter, organized by Advocates for Children, urging the mayor and the DOE chancellor to open these enrollment centers to students who are homeless, so they may have access to reliable technology for remote learning and the space to focus on their lessons, with the help of a volunteer DOE educator. The letter also requests that the the DOE expand enrollment eligibility to the children of shelter workers.

During this time of crisis, the health and safety of the staff, members, and partners of the NYJL community are our highest priorities. Although we are making adjustments in real time as the COVID-19 situation evolves, we remain steadfast in our commitment to women and children in New York City, community partners, and our strong, passionate women volunteers.

We continue to monitor and follow the public health recommendations of the New York City Department of Health and Mental Hygiene, the Centers for Disease Control and Prevention (CDC) and the World Health Organization (WHO), as well as the directives of local and federal government officials. END_OF_DOCUMENT_TOKEN_TO_BE_REPLACED

DUE TO THE COVID-19 PANDEMIC, SPRING 2020 PARK DAYS HAVE BEEN SUSPENDED. THANK YOU FOR YOUR INTEREST IN VOLUNTEERING WITH THE NYJL’S PLAYGROUND IMPROVEMENT PROJECT. STAY SAFE.

The New York Junior League’s Playground Improvement Project (PIP) is excited to announce that this spring, they will revitalize St. Nicholas Park in Harlem, in partnership with the New York City Department of Parks and Recreation!

Every year since 1992, New York Junior League (NYJL) volunteers, as part of the Playground Improvement Project, have designed, planned, funded, and completed a playground or park renovation. Initially focused on local school playgrounds, the NYJL eventually forged a partnership with the NYC Parks Department to revitalize public parks. Many Manhattan parks lack funding or staff to make general improvements to gardens, benches, and playground equipment. The NYJL helps meet these needs by contributing supplies and dedicated volunteer time.

A “ribbon park” bordering Hamilton Heights, Manhattanville, and Harlem, St. Nicholas Park was created in 1895 when the City acquired the land after the close of the Croton Aqueduct. The patron saint of Amsterdam, St. Nicholas contributes his name to two of the park’s surrounding streets, commemorating the Dutch farmers who settled northern Manhattan in the late seventeenth century.

In 1995, Harlem community members and City College formed the initiative”Take Back St. Nicholas Park” and renovated the park. In 2010, the New York Junior League beautified the park and is excited to return for another round of renovations this spring.

The NYJL invites volunteers from the public to help restore St. Nicholas Park during specific weekends in April and May!

If you have questions, please contact playground@nyjl.org for more details. 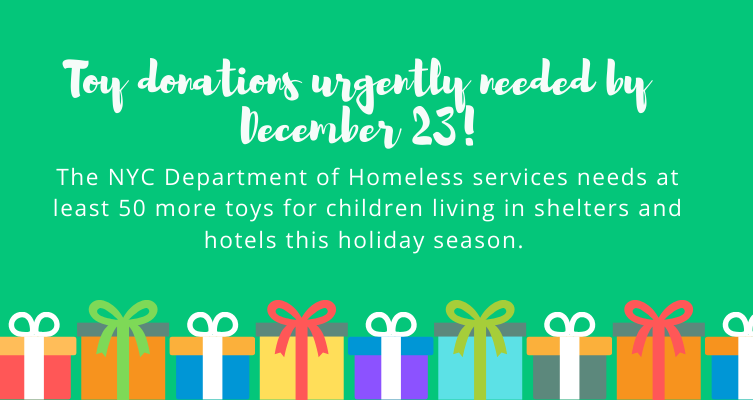 More than 22,000 children in New York City are homeless this holiday season.

Every year, NYC’s Department of Homeless Services (DHS), the Coalition for the Homeless, and other organizations mobilize a massive drive to collect and deliver gifts to every single child living in a shelter or hotel over the holidays.

To make sure every child receives a gift, the NYJL is partnering with the NYC Department of Homeless Services (DHS) to help collect 50 urgently needed toys by close of business on Monday, December 23. New toys should be delivered directly to Astor House (130 E 80th St, New York, NY 10075) between now and Monday. The DHS administrator will personally pick up gifts and deliver them to children on Christmas Eve.

If you are unable to hand deliver wrapped gifts to Astor House by December 23, Mary Arnold Toy Store near headquarters is happy to take toy orders and deliver them to Astor House for free. You may contact the store directly at 212-744-8510. You can view their inventory on their website.

Thank you for your generosity this holiday season!