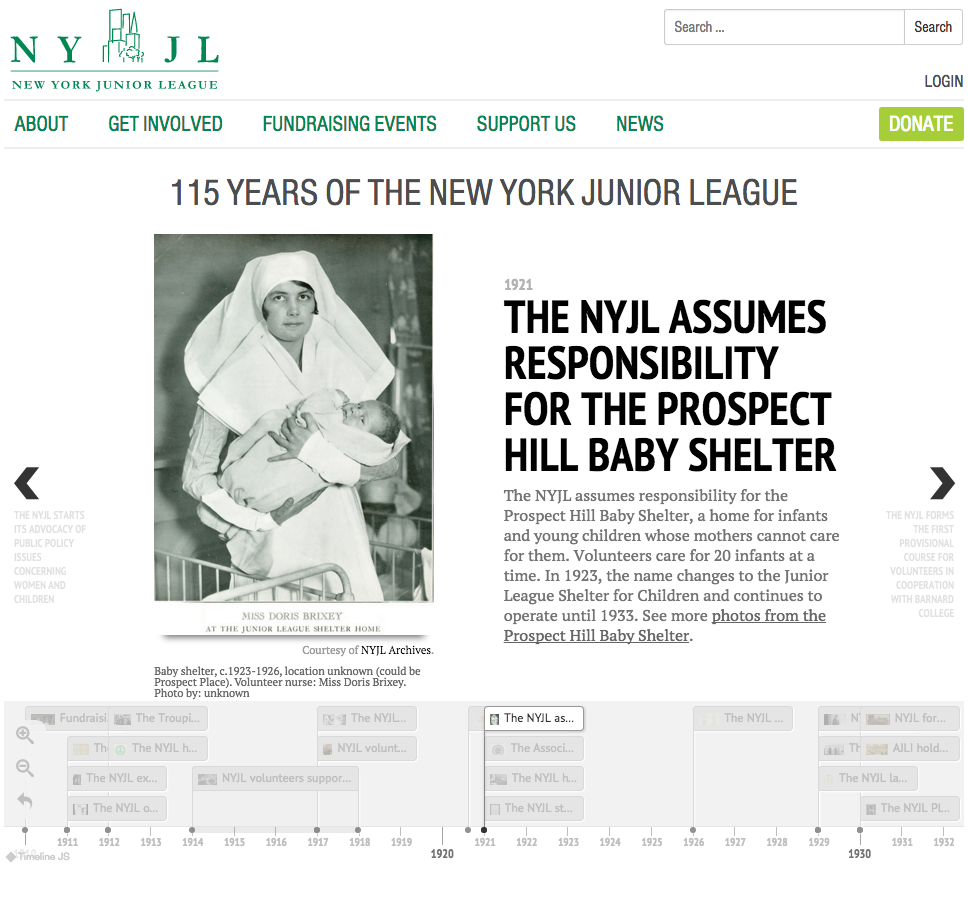 To celebrate the New York Junior League’s nearly 115 years of community work, we’ve put together an interactive timeline that highlights the dedication of NYJL volunteers.

In 1901, our founder Mary Harriman was moved by the deprivation she saw in New York City, and she did something about it. She encouraged 80 young women to go into the settlement houses on the Lower East Side to do hands-on social work among those in need and formed the Junior League for the Promotion of Settlement Movements. In her time, she was taking on some of NYC’s toughest and most critical issues. She believed that the Junior League was organized as a means of expressing the feelings of social responsibility for conditions which surround us.

And it has been up to us to continue that legacy. And indeed, we have—for nearly 115 years.

Like Mary Harriman, we all find ourselves linked together here by spirit, courage, a love of our community, and the wish to make a difference. In that spirit, we continue to be at the forefront of tackling society’s most pressing issues. Addressing and acting as advocates on critical issues including human trafficking, foster care, juvenile justice, teen self-esteem, literacy, and others.

As NYJL volunteers, our unwavering commitment is to our community. We work hard to continue to develop exceptionally qualified leaders who identify our community’s most urgent needs and address them with meaningful and relevant programs and initiatives that improve lives and also, importantly, change the way people think.

Join our celebration on social media. 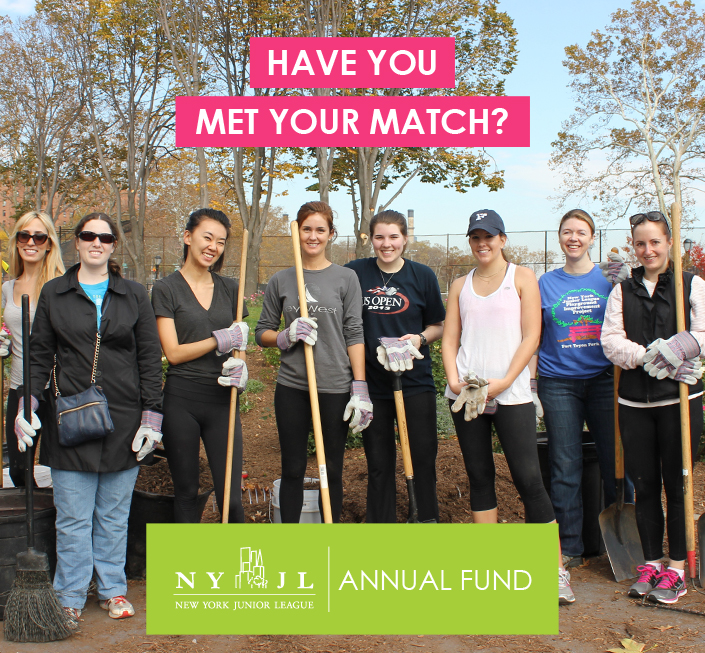 Your generous donations to the New York Junior League improve our community and train our volunteers. Your company’s matching gift can turbocharge the impact of your contribution. According to GivingUSA, approximately 65% of Fortune 500 companies offer matching gift programs and corporations overall give more than $3 billion cash to nonprofit organizations each year. But unfortunately, at least $10 billion in workplace matching funds go unclaimed each year, per Great NonProfits.

Last year, the Annual Fund received $23,092 in corporate matching gifts thanks to the corporations listed below. Confirm your employer’s giving policies by asking your internal Human Resources department, or you can search online for companies with matching gift programs. Please help the Junior League capture donations from your company this year. Together we can make a difference in the future of our organization and our community.

The New York Junior League is excited to announce that it received two grants during the 2013-14 NYJL year.

The Kashi grant, facilitated through AJLI, provides $3,500 in funding for the CHEF committee to expand their healthy eating program for low-income NYC families. Under the direction of the Board Development committee, CHEF committee co-chairs Marissa Vicario and Brook Christopher made a compelling case for expanding the CHEF program into four additional community centers and offering more one-day nutrition sessions for enrollees, along with supplies for pop-up kitchens for healthy cooking demonstrations.

If your employer offers foundation funding opportunities or if you’re aware of grant opportunities that align nicely with the NYJL’s mission, please contact the NYJL COO. 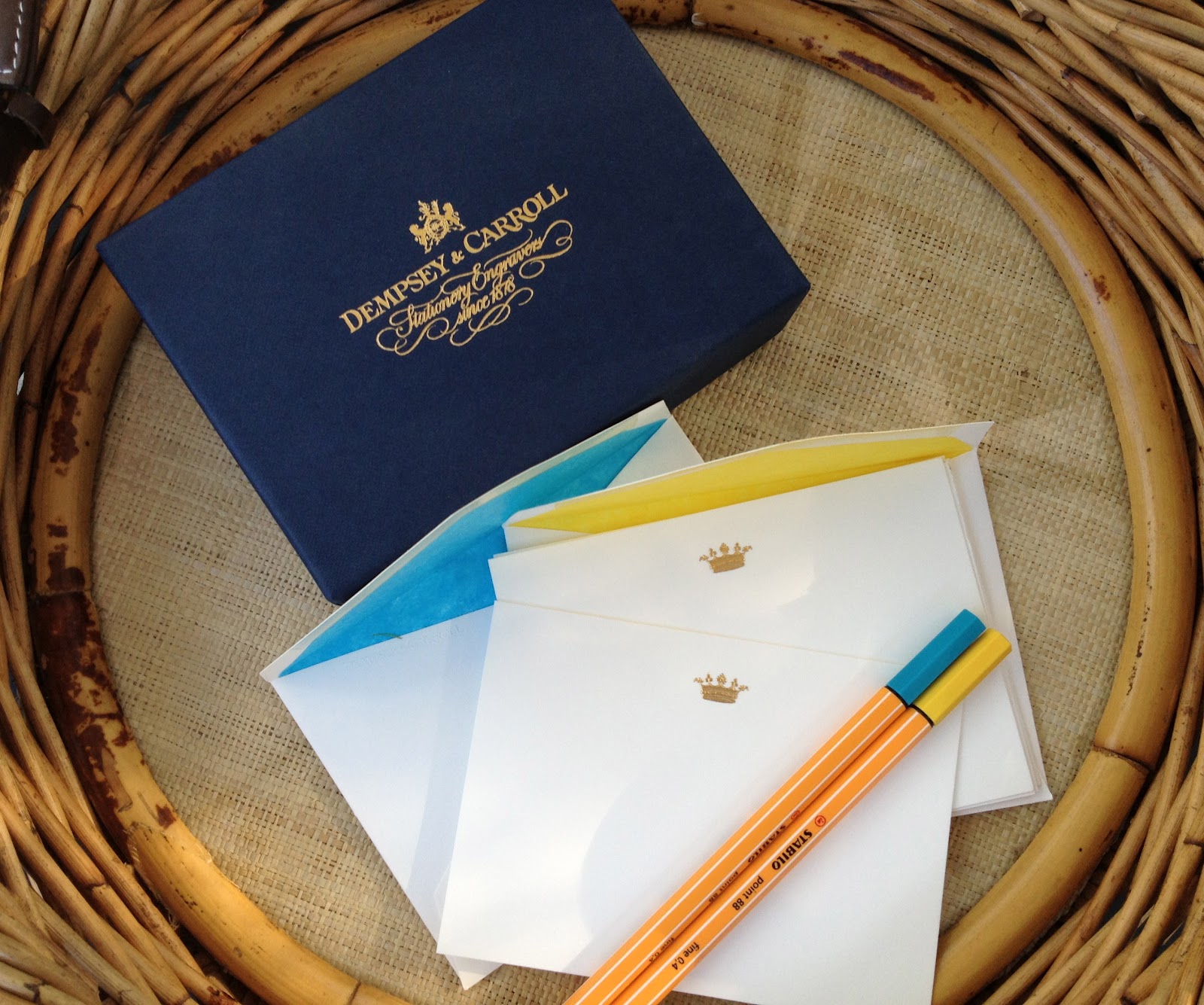 As we enter the holiday season, we all search for just the right gifts for those special people in our lives. This year, consider giving a gift that will live well-beyond the season – make a donation to the New York Junior League’s Annual Fund in honor of your loved ones.

The NYJL Annual Fund helps support the upkeep of the Astor House (built in 1927 for Vincent Astor and designated a landmark in 1966 by the NYC Landmarks Preservation Commission) as well as our community endeavors. The Annual Fund is the way to make the most immediate impact in support of the NYJL mission. Dollars raised in previous years have gone to support efforts including the renovation of the Astor House garden, as well as the purchasing of BigBelly Solar units for Tompkins Square Park.

For $100 you will receive five limited-edition Dempsey & Carroll acknowledgement cards which you can then, in turn, wrap up as a holiday package for your special gift recipients.

You can donate to the NYJL Annual Fund in honor of a friend or family member, or visit us at Golden Tree.

New York, New York (October 23, 2014) — The New York Junior League (NYJL), one of the largest women’s non-profit volunteer organizations in New York City, announced Brooks Brothers, the country’s oldest clothing retailer and an American icon, is a corporate sponsor for the 2014-2015 fundraising year. The NYJL is an organization of women committed to promoting volunteerism, developing the potential of women, and improving communities through the effective action and leadership of trained volunteers. The organization boasts more than 2,600 volunteers who donate more than 250,000 hours of service every year.

Brooks Brothers will host the NYJL Fall House Tour kick-off reception on Friday, October 24, 2014 from 6:00 to 8:00 p.m. at their flagship store at 346 Madison Avenue. At this special shopping event, guests will enjoy a 15 percent discount on Brooks Brothers’ purchases and the store will make a donation to the NYJL equal to 10 percent of the evening’s sales. Admission for the event is complimentary for all Fall House Tour ticket holders and shopping-only tickets are available for non-House Tour guests. The NYJL House Tours are devoted to showcasing New York City’s prestigious and luxurious residences, while highlighting architecture, art, history, and the exquisite style of interior design.